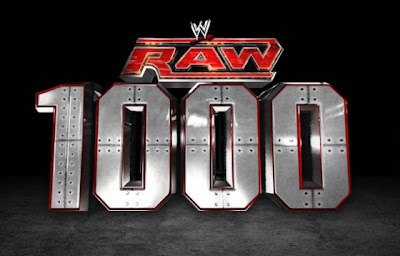 Last night was the 1,000th episode of Monday Night Raw. The weekly wrestling program is the only television show in history to ever reach the 1,000 plateau, and is also the longest running weekly episodic television program (channeling my inner Michael Cole) in history. Despite the always fearful-of-admitting-to-watching-wrestling society we live in, the feat is unprecedented. It becomes especially remarkable once you take into account the facts of producing shows year-round, and of course, for the betterment of the last eleven years, doing it live. Despite the skeptics, Raw deserves all of the praise from the entertainment world for it's feat as it continues to do so with mass appeal and top-5 ratings each week.


However, with all of that said, Monday Night Raw for yours truly is a program that runs parallel with my life. From the very first show, as a lover of Pro Wrestling (not just WWE, but the industry as a whole), Monday Night Raw was the destination television show, and remains so for me. From 1993 in the Manhattan Center, to the Monday Night Wars,  to the very present, Raw has always been there along the way from my elementary years, through the teenage years, through college, and even now as a married man.

As I've mentioned before in the Pondering 10 list: Favorite TV Shows of All-Time, Monday Night Raw is a staple and cornerstone in my life. Every Monday, no matter what, Raw is always an option.

As as the show celebrated 1,000 shows with a pretty eventful and nostalgic show, I'm happy to see something that has been a part of my childhood and growth, continue on, unlike most things which have eventually faded out. Sure, the names have changed, the production has changed, and in someways, the audience has as well, but the show remains - every Monday Night, bringing Pro Wrestling to those that aren't ashamed, and even those that are in the closet about their fandom.

As many wrestling fans have been doing recently, I could leave you with a list or some commentary on my favorite Raw moments, but I won't out of fear of going on too long and boring you, or out of sheer fear of leaving a moment off the list, as there have been so many.

However, what I will do, is give my review of last night's show in vintage (there I go again with the Michael Cole influence) Dome Pondering wrestling review format - several rhetorical questions.