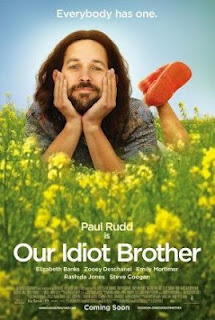 A hippy, idealist brother unintentionally changes and reveals the truths in the lives of his sisters when he barges into each of their lives.

After Emily and her husband have forced their son River into certain values to prepare him for a prestigious school, Ned's eventual influence comes through during his interview.

Omar: [speaking extremely slowly] I'm Officer Omar Coleman. I'm your parole officer.
Ned: I'm Ned Rochlin. Why are you talking so slow?
Omar: [now speaking normally] I just figured, looking at your sheet, that since you sold grass to a uniformed police officer that you must be retarded.
Ned: Yeah, I get that a lot.
---
Ned: I like to think that if you put your trust out there; if you really give people the benefit of the doubt, see their best intentions, people will rise to the occasion.

Our Idiot Brother isn't exactly the movie you expect it to be. If you expect over-the-top silliness like I did, then be prepared to be shocked, or at the least, eased. This film continues the long line of films from the crew in this cast of a very simple plot, a very simple moral, and simple dry humor we've come to see from the previous films they've been in.

Paul Rudd, excels in the role of Ned as the hipster oblivious brother. As usual, classic Rudd delivers his patented dose of awkward and hilarious dialogue with others throughout the film. The rest of the cast is the perfect blend for Rudd as they support the overall comedic style of the film. This is especially seen in Ned's dialogue with Jeremy, played by Adam Scott, and Billy, played by comedian, T.J. Miller.

Our Idiot Little Brother isn't near a blockbuster or a must-see, but it is not a bad watch. It's a simple movie with lots of humor with a nice message thrown in. The perfect film for a rainy day, or to kill sometime.