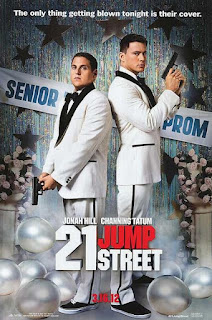 Based off of the TV show, two young-looking and underachieving cops are sent back to High School to blend in, infiltrate the drug scheme, and to bring down the suppliers of a synthetic drug ring.

After finding the dealer inside of the school, he not only sells them the synthetic drug but forces them take it on the spot to ensure they were legit. Schmidt and Jenko then attempt to throw up to remove the drug before it enters their system but failed. The rest of the day, both attempt to finish the day as they go through the different phases of the drug's effects.

I'm not a huge fan of the recent movement of taking things from the past and remaking them. Whether it be movies or television shows, it usually does damage to the original brand. However, thankfully, 21 Jump Street doesn't exactly do that.

The film is pretty good. Not bad, but certainly not worthy of all of the hype it has built up. The cast of Jonah Hill and Channing Tatum are very funny in the film, and do deliver some insanely hilarious moments. However, the issue with 21 Jump Street is that it delivers much of those moments in the first half of the film. In the second half of the film, much of the comedy runs dry or simply grows tired. This especially becomes noticeable during the big car chase scene which really comes off flat and gives the film a "jump the shark" feel.

21 Jump Street will offer some funny lines, along with the typical crass, vulgar, and ridiculous comedy that everyone expects these days for cheap comedic purposes. Depending on your tolerance, it's give or take.

What it does very well is taking the plot-line from a cheesy show in the late eighties and updating it into a pretty formidable concept for the current age. Also a nice touch by writer, Jonah Hill, to incorporate pieces of the show into the movie such as Holly Robinson Peete playing the classic and original 21 Jump Street character of Officer Judy Hoffs, the use of the McQuaid brothers story line, and a followup on the Tom Hanson character, originally played by Johnny Depp.

Overall, 21 Jump Street is a tale of two halves and a mix of good and bad.

However, it is still worth the watch.