More than a Destination (X), But A New Beginning 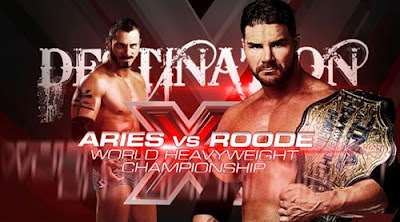 I've been saying it for the last two months - TNA Impact Wrestling is the best overall wrestling product in the business right now. No debate. No doubt.

Week after week, Impact has delivered the goods, and after last night's Destination X pay-per-view, it seems the product just took another step. A step towards it's future.

Heading into the Destination X, the company continued it's new creative direction (Did I mention how awesome it has been?) in a renewed focus on the X-Division and creating new stars of their own while keeping the shows fresh with concepts such as Open Fight Night and of course a favorite of mine, GutCheck.

Tonight we saw two of those stars battle in a match that was epic. The longest reigning champion in TNA history (and personal favorite) in Bobby Roode against the quickly rising Austin Aries who has gained such a cult following in one year it has been amazing. The match, which went back and forth to the point where even yours truly quickly ditched my preconceived notion that Roode would walk out the victor. A dramatic (and I do mean dramatic!) brainbuster later, TNA has itself a new - excuse me - a NEEEEEEEEEEEEW World Heavyweight Champion!

Aries quickly trended on twitter and wrestling fans of all companies are now intrigued and interested in the product. I personally can't wait for Impact on Thursday!

Also, Destination X also saw the continuation of two of the company's biggest rivalries in Samoa Joe vs. Kurt Angle for Bound For Glory series points and AJ Styles vs. Christopher Daniels in a Last Man Standing match. Angle/Joe was stiff and hard-hitting with tons of mat wrestling and Styles/Daniels tore the house down with a knock-down drag-out fight. Both matches delivered big time.

With a new X-Divison champion in Zema Ion, who has star quality written all over him, the impending return of Jesse Sorenson, and of course the highly controversial recent signing of Kenny King from Ring of Honor Wrestling (ROH), TNA has a very, very bright future.

And honestly, after tonight's awesome pay-per-view, I really feel like last night might be have been that event, and with Aries winning the title, that moment, which finally puts the company in a position to move forward - for real.

Moving forward with younger talent - their own homegrown talent - the company is now delivering a product that now has top quality guys who can attract even the casual fans of the art form.

It's nights like Destination X that keeps you coming back as a wrestling fan.

If you're a wrestling fan, a casual fan or even a sometimes-fan that only watches the currently stale WWE product, I urge you to check out the TNA product right now.