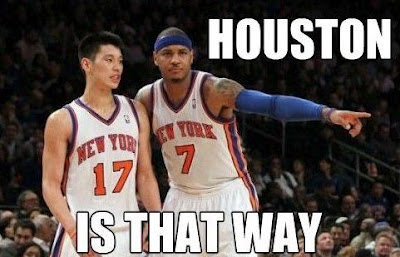 Linsanity and all that it was in this city was downright amazing. It captured this city's attention coming off the high of another Giants Super Bowl, and carried us into into Spring Training. I loved Linsanity. In fact yours truly even got wrapped in it as well (All-Lin On Jeremy Linsanity) (All-Lin On Jeremy Linsanity Part II) (Pondering Picture #18). It is definitely a time that all Knicks fans will never forget as it provided us an infusion of hope during a time when things looked very bleak.

However, with the recent developments of the "poison pill" offer sheet from the Houston Rockets to Jeremy Lin of three years, twenty-five million dollars, I realized it was time for me to separate Jeremy Lin the player from Linsanity.

Since the first offer sheet was announced, I've gone back and forth on whether the Knicks should bring back Lin. For days I debated on whether matching the offer was in the best interest of the team heading forward, especially as Knicks GM, Glen Grunwald, began filling the roster with veterans. The message was very clear - this is a win-now team. And with a window that looks to be open for three to four years to do something special, the Knicks had to go for it. The future was now. No holding back. No question marks.

And Jeremy Lin is a huge - HUGE - question mark!

Despite the Lin-decision (sorry, have to get what's left of the Lin puns out of my system), I still felt the initial offer of three years, twenty million dollars was steep, but a decent risk.

However, once this story quickly unraveled with Houston increasing the offer and my beloved Knicks landing Raymond Felton and Kurt Thomas (Gotta love Dirty Kurty!) in a sign-and-trade with Portland, I realized that the Knicks never wanted to bring Lin back all along.

From their pursuit of Steve Nash; Jason Kidd; the Argentinian veteran, Pablo Prigioni, and eventually Raymond Felton, the Knicks, like many top level NBA scouts around the league, believe Lin's ceiling is not as high as we dreamed of during Linsanity.

During a time when most are criticizing the Knicks for this decision (which, honestly, they would have done if they matched this deal as the Kicks are the most damned if they do, damned if they don't franchise in sports), finally, this front office made a sound, reasonable, and fiscally responsible call.

Over the last few days, all of the theories about Lin's marketability and external financial advantages were proven to be myths by many sports business analysts, including the well known, Darren Rovell.

At a more reasonable price, the Knicks solidified their back court with veteran point guards that can control an offense and will be able to make it all work with some misfit pieces (Hello Carmelo and Amar'e!) on the court.

And I'm sure many of you DP devotees have it in the back of your mind as you are reading this, so since I've mentioned it before, I'll just come forth with it again - I'm a big fan of Raymond Felton. I loved his first stint here in NY, and I think he'll be motivated enough again to get himself back in shape and rekindle that unstoppable pick-and roll chemistry that almost made him an all-star, and made Amar'e Stoudemire into an MVP candidate in 2010.

However, the biggest factor that has won me over in agreeing to let Lin go was this question raised by Stephen A. Smith on the Stephen A. and Ryan Rucco Show on 98.7FM ESPN NY:

"Is Lin the difference in making the Knicks a Championship team?"

And the answer is definitely no. And therefore, why should the Knicks pay upwards of $51M in that third year of his contract with luxury tax implications included for a player that won't make a huge difference?

And honestly, when did Jeremy Lin become bigger than the franchise itself?

Knicks fans, it's time to face the truth, Linsanity is gone, and what remains is Jeremy Lin, the basketball player.

[Sideblog: And for those of you fraudbag Knick fans that claim this is the last straw and you are now becoming Brooklyn Nets fans, I have one word for you - GO! If this is the event that causes you to switch allegiances, as if the past ten years didn't already, then you truly weren't a fan. Good riddance. This will surely lighten up the load on the bandwagon from those that jumped aboard during the Carmelo Anthony honeymoon. Don't come back when things are rocking.]

I like Lin, but I am not in love with Lin. We spent ten years giving guys like him massive deals solely on potential and small sample sizes in the league (See: Eddy Curry and Jerome James). It's about time the Knicks are fiscally responsible.

This comes down to the fact that there is a large contingent still in love with that magical, storybook run this past February of the common guy prevailing, the underdog winning, and it having the feeling of a fairy tale happening right before our eyes. We want that feeling again, and somehow, some believe Jeremy Lin is the sole component to recapturing that feeling, and somehow turning it into a nightly experience.

Some believe that magic is priceless and worth every dime the Knicks and James Dolan would have to pay.

And for those who are criticizing the Knicks for "being cheap" for not just matching the offer sheet and paying the luxury tax bill in the third year, to quote Mavericks Owner and self-made millionaire, Mark Cuban, "It's all good until its your money, right?"

If Lin still puts up 18 and 8 with the Rockets, that's great. I wish him the best. He's an awesome individual with a wonderful character, and a great representative of faith that inspires us all, especially myself.

However, the truth is, the Rocket's aren't going anywhere. And not anytime soon.

And that's the best case scenario.

What if he regresses to what almost 90% of scouts believe he is and what he has been before his magical twenty-five game run, a very good backup point guard? Then what?

Yet, it doesn't matter.

For the Knicks, the next few years are our time to make some noise. There is no room for question marks, projects or what if's. And certainly no time for waiting around for magical runs, moments and the next big headline.

The Knicks usually screw up decisions like this, and I'm always here on the DP firing off rant after rant on how terrible that decision is.

The Knicks were able do what took some of us a while to come to grips with, and what most of us have yet to see - and that's separate Linsanity from reality.

For the first time - in a long, long time - I really believe a lot of people have this wrong and Jim Dolan, an easy target for ridicule, and his staff have made the correct decision.