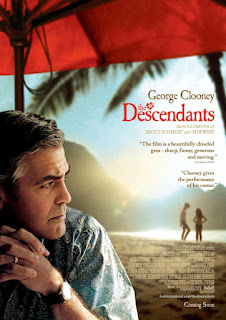 What it is it about?

Matt King, a trustee who holds the fate of vital land in Hawaii, attempts to re-connect with his daughters and make sense of the last few years of his life after his wife is seriously injured in a boating accident.

On their first visit to Elizabeth's parents to break the news of her impending death, Sid's personality and antics rubs the family the wrong way and eventually results in him being punched in the face.

Matt King: I don't want my daughters growing up entitled and spoiled. And I agree with my father - you give your children enough money to do something but not enough to do nothing.
---


Matt King: ...Do you get hit a lot?
Sid: I don't know, I've had my share.
Matt King: [to Alex] Your friend is retarded, you know that?
Sid: Hey I've got a brother who's retarded! You don't have to get all derogatory.

All of the critics and reviews already out there are completely correct about this film. The Descendants is an absolutely terrific movie. Just out right fantastic. George Clooney is amazing as always, and really delivered his best work since Up in The Air in 2009. Shailene Woodley and Amara Miller were just as good in their supporting roles as well. However, Clooney, in his role as Matt King really hooks the viewer in with a transparent sense of the character's situation at hand, but also causes you to feel the mixed array of emotions he is in.

And honestly, Nick Krause deserves at least a mention as the memorable Sid. You will get a kick out this character!

What really makes The Descendants a must-see film is it's ability of pacing and storytelling. The film does a great job of slowly giving you more and more to the point where you understand and feel what this transforming family of three is going through as they not only cope with the situation of a dying mother and wife, but becoming re-connected after this situation.

The Descendants is the ultimate self-recovery story, and one that is highly enjoyable with moments of laughter, sadness, and intrigue all rolled into a great movie.

Check this one out, for sure.