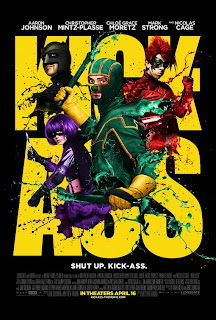 Dave Lizewski, a high school outcast and an avid comic book fan, decides to do something different, something of greater good, and become a super hero, despite not being equipped or trained to do so.

Looking to finish her father's mission, Hit-Girl seeks the help of Kick-Ass and enters the D'Amico tower and begins making her way through all of his guys before finally coming face to face with Frank D'Amico.

Hit Girl: Aww dude, that is one *gay* looking taser.

I'll refrain from using the already cliche line that the film Kick-Ass is well, kick ass (thought I just did), but it is indeed a great film. As a viewer that has not read the comic book, the movie does a great job of not only introducing the characters, but the history of the several different super heroes, including Kick-Ass himself.

The film is well performed with lots of humor thrown in as well. The underlying plots of "getting the girl" and "finding the inner-fight" is also added as it is in every action/super hero film. The action scenes and the awesome camera shots are what really puts Kick-Ass over the top as a great movie. And oh yeah, the guts and blood does help too!

Also, it must be acknowledged that Aaron Johnson and Chloe Grace-Moretz are also phenomenal in their roles. Superb work.

The only drawback to the film is the very reason for minor controversy during Kick-Ass' release, and that was the over-use of language in the film, particularly by the young Chloe Grace-Moretz who played Hit-Girl. While Grace-Moretz did indeed offer a great performance, there was a slight uneasiness as a viewer with hearing a young child offer up such foul language in her lines.

However, despite that, Kick-Ass was jaw-dropping. It's compelling, entertaining, suspenseful, incredible, humorous and most of all intriguing.

And with the ending, there seems to be a sequel on tap.

This is one you must check out when you get the chance.