July 02, 2012
Every sport allows an athlete to exhibit a certain flair and personality that ultimately brings another quality of interest and entertainment to the game. From quirky shots to weird mannerisms, there are a ton of different stylized actions that makes sports, sports. We love these personalized traits, we mimic them in our backyards, and we wish to hopefully have someone do the same to our own one day. In baseball, the stance and swing is the epitome of this. Despite the object of swinging a bat and connecting with a ball occurring many times a game - and by thousands of players over the history of the game - every individual has had their unique stance, and more specifically, a unique swing. Over the years I have seen my share of swings and have developed some favorites (even though some were mechanically incorrect). The following Pondering 10 will take a look at my All-Time Favorite Baseball Swings.

10. Frank Thomas - Thomas, otherwise known as the "Big Hurt" (Such a cool nickname), was always a favorite of mine. Throughout little league, I had his cleats and his batting gloves, and have had many issue comparisons between myself and Thomas. After all, I too was a rather large baseball player. Nonetheless, Thomas' swing was simply awesome as he completely unloaded on the ball bringing all of his weight through to the front side on his swing. Just loved it.

9. Gary Sheffield - C'mon, from the waggle of the bat to the just outright violent swing, Sheffield's swing will always be unique, and will always be a favorite among many baseball fans. 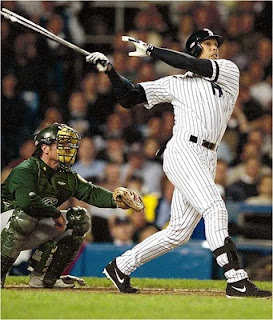 8. David Justice - Justice had such a long swing, but for some reason, that blend of a high leg kick and a long swing with his hands dropping down in the zone always appealed to me. Especially, that eventual game winning home run in 2000 that sent the Yankees to the World Series. 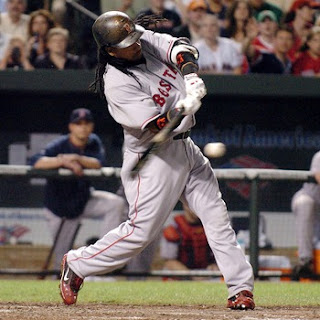 7. Manny Ramirez - What can you say? Ramirez had of the prettiest, flawless, and most balanced right-handed swings I think I've ever seen in my lifetime. The guy was a complete nut, but Manny always delivered the RBI and did so with a sweet swing.

6. Mike Piazza - Head down, bat through the zone, and the follow through that whips the bat out of the zone around his shoulder smacking hard against his back - loved it! Can't explain it, but it was a joy watching his swing.

5. Jim Edmonds - Edmonds swing isn't something you would teach younger players. He hit off his back leg constantly, but his upper body balance and level swing was great to watch. The absolute best was watching him connect with one he knew was out of the park.

4. Robinson Cano - By far my favorite swing in today's game. Cano has some holes where he gets out on his front leg sometimes, but for the most part, Cano's swing is so pretty, and so balanced, that watching him spray the ball all over the field or even pull one into the seats is awesome. 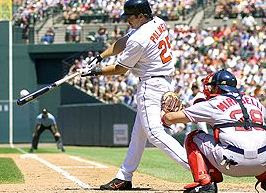 3. Rafael Palmeiro - Forget the steroid issues that came about later in his career, Palmeiro's swing was the same swing all the time. ALL. THE. TIME. Just a great swing. Joey Votto might be the closest swing to this today, who probably would have made this list at #11.

2. Ichiro - Watching Ichiro hit was always exciting. It will never be duplicated. Practically running out of the left-handed batters box while making solid contact is a once in a lifetime swing. Maybe a once-in-history swing.

1. Ken Griffey Jr. - Prettiest swing ever. EVER! Growing up, we all wanted to have that upper body waggle with that long and beautiful swing. Griffey had such a nice swing that he would hit a pop up to shallow right field, and you would still think it was going out. "The Kid" was so amazing to watch, and it's a shame that injuries ruined what could have been an even better career.