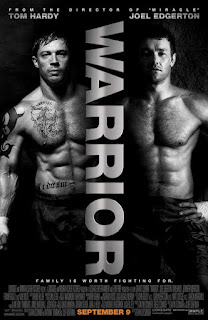 Two brothers torn by family issues and trained by their once alcoholic father enter a mixed-martial-arts tournament for personal reasons and  a payoff that will solve the conflicts and baggage in their lives.

[Without giving away the end of the movie - Spoiler Alert]

The Final scene of the movie - after the final fight, both brothers walk out together.

Warrior bombed in the theater. Never really made a profit. And hasn't really caught on in DVD sales. However, if you watch this film, it will very much surprise you that the those very statements are true. Warrior is a film that gets better and better as it progresses, finishing with a scene so powerful, that you are left with so many emotions and morals from the film. Truthfully speaking, Warrior is everything it's reputation isn't - an amazing film.

It's a film that is so well written and  thoroughly performed, with characters that are rich with realism and baggage, that it creates an unique and inspiring plot. Warrior took what made the Rocky films so popular and added multiple levels of story and depth to the plot that results in a steady build to a tremendous and powerful ending. As I've said before, Warrior continually gets better as the movie continues, and you simply find yourself connected with a wide stare at the final scene.

Both stars of the film, Tom Hardy and Joel Edgerton were tremendous in their roles as the Conlon brothers. However, the biggest surprise was the role of father, Paddy Conlon, by Nick Nolte. Nolte was downright terrific in the role of the recovering alcoholic filled with sorrow from screwing up his relationship with his boys.

If I had to pick something that was negative, it would have to be the role of Koba played by Kurt Angle. While Angle was indeed great, I found it hard, and at times a stretch to believe a well-known American gold-medalist in the role as a Russian MMA star. Nonetheless, this is merely trivial, and doesn't hurt the movie at all.

All in all, Warrior might be one of the greatest injustices ever. Please seek out this film and be sure to watch.

As stated before, Warrior, in one word - powerful!